Geneva, 8 March 2022 – To mark International Woman’s Day, Mirabaud has announced its new partnership with Anaëlle Pattusch, the young 19-year-old Swiss skipper. Anaëlle Pattusch is aiming to cross the Atlantic solo and without assistance in the Mini Transat race, the first leg of which will kick off in September 2023. Anaëlle Pattusch will take up the challenge of being the youngest female Swiss navigator to cross the Atlantic solo at just 20 years of age. Supported in this initiative by fellow Swiss sailors Justine Mettraux, Alan Roura, Valentin Gautier and Simon Koster, the young sportswoman forms part of an up-and-coming generation of offshore Swiss yachtsmen and women. 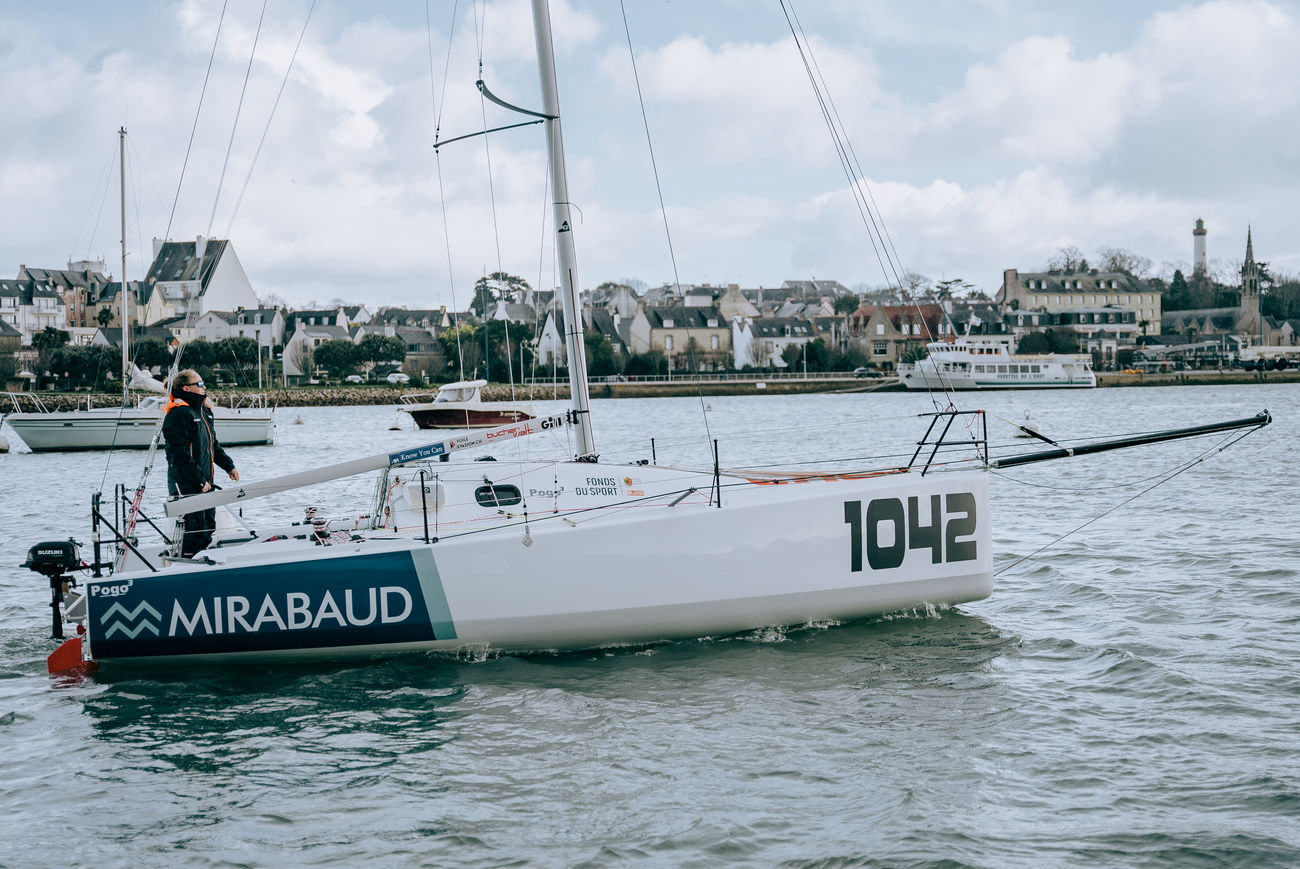 Originally from the town of Versoix in Switzerland and passionate about sailing since early childhood, Anaëlle Pattusch has undertaken, under her own initiative, to prepare for the Mini Transat – a 4,050 nautical miles (7,500 kilometres) offshore solo race between Les Sables-d’Olonne in France and Santa Cruz de La Palma in the Canary Islands for the first leg, and from Santa Cruz de La Palma to Saint François in Guadeloupe for the main crossing. This rite-of-passage race is one of the key milestones in the careers of high-level sportsmen and women striving to become professional offshore ocean racers. The Mini Transat is a solo race on the smallest of offshore Mini racing boats (21 feet), with no onboard assistance or means of communication with land (no weather routing by satellite, computers or phones).

As Main Sponsor, Mirabaud covers the costs and maintenance of the sailing boat as well as the athletic, mental and technical training of Anaëlle who will enter Brittany’s racing centre, Lorient Grand Large, full-time at the end of next June, once she has successfully graduated from secondary education.

“I’m extremely grateful to Mirabaud for their support and belief in me. I’m going to fulfil my childhood dream of crossing the Atlantic solo. This race is a personal challenge that combines both the desire to excel and to become part of the very closed world of offshore racing. Most of the top sailors’ careers were launched in the Mini Transat. It’s a rite of passage if you’re hoping to become a professional yachtswoman,” explains Anaëlle Pattusch.

“We’re delighted to be supporting Anaëlle Pattusch, a young and talented navigator at the very start of her sporting career. There are still too few women in this discipline (less than ten per cent) and through this sponsoring initiative, we also hope to encourage female careers” declares managing partner, Nicolas Mirabaud.

Going on to add that, “Sponsoring Anaëlle was a no-brainer for us given how closely her values mirror our own, such as her passion, independence and, of course, entrepreneurial spirit. We’re really looking forward to accompanying her in this journey over the next two years leading up to the 2023 Mini Transat”.

Entrepreneurship at the service of sporting excellence

Preparing for a Mini Transat is a real undertaking. It requires at least two and a half years of hard work and investment as well as rigorous organisation and follow-through. Anaëlle lists what is involved: drafting sponsorship applications, making presentation videos, sending out dozens of funding requests, interviews, ordering a new sailing boat and road trailer and choosing the onboard equipment in line with the very precise regulations of the Mini class category, overseeing the whole project which involves travelling back and forth between Versoix and Brittany, and implementing a sailing programme through a calendar of races that needs to fit in with studies, training, qualifying events in the Mediterranean and Atlantic and the multiple prerequisite training courses and licences she needs to complete.

Anaëlle Pattusch is currently preparing for the Mini Transat solo offshore race and will set off in September 2023 from Les Sables-d’Olonne, aged 20. She will be among the youngest “Ministes” and the youngest Swiss woman of all time to cross the Atlantic single-handedly and without assistance on the smallest of offshore racing boats, a Pogo 3 measuring 21 feet.

Big names from the world of offshore racing such as Loïck Peyron, Michel Desjoyeaux and brothers Laurent et Yvan Bourgnon, earned their spurs in this event. Sailing is one of the rare sports in which men and women compete together, on an equal footing, in the same events, without separate categories. However, women still only represent ten per cent of those taking part in offshore racing. Fellow Swiss woman, Justine Mettraux, has nonetheless managed to carve out a place for herself in this world and is currently preparing for the Vendée Globe 2024.

The Mini Transat, created in 1977 by British sailor Bob Salmon, is a solo race of 4,050 nautical miles (7,500km) that is played out on the smallest of offshore racing boats in the Mini category (21 feet in length). It takes place every two years. This race and, above all, the preparation that goes into it, is one of the toughest events on the offshore racing circuit and puts sailors severely to the test as they must cross the Atlantic with no onboard assistance or means of communication with land (no weather routing by satellite, computers or phones). Every Mini is equipped with a satellite tracker and a distress call transmitter, if all else fails. To ensure their safety on the high seas, sailing boats referred to as “accompanying boats” follow the fleet throughout the journey. 1 accompanying boat is required for every 12 Mini vessels.

The 84 Ministes selected will set off from Les Sables-d’Olonne headed for Saint-François in Guadeloupe with a stopover in the Canary Islands. The route of the race is very tactical. Not only does it require strategy but there are also a significant number of challenges to overcome. The first section between the start and Portugal can prove to be quite invigorating due to the headwinds and the possibility of gales. And crossing the Bay of Biscay is never without its difficulties. The potential to run into killer whales is another factor not to be underestimated, as was the case for several skippers in the 2021 Mini Transat. The second leg, with its 2,700 nautical miles taking about two weeks to finish, will largely be played out in the trade winds until the finish line.

Anaëlle Pattusch will cross the Atlantic on a Pogo 3 – a 21-foot offshore racing boat designed by naval architect, Guillaume Verdier and built in Brittany’s Pogo Structures shipyard. This boat is one of the best in the Mini Class, a production boat that has proved its worth in offshore races and particularly in the Mini Transat.
Anaëlle took possession of her boat on 14 February 2022 at which point she began preparing to obtain her qualifications in 2022 in the Mediterranean and Atlantic, after which she will begin work on her performance in 2023 in the Lorient Grand Large training centre.

Two years of intense preparation are necessary in the Lorient Grand Large centre of excellence for offshore racing, based in the heart of Lorient’s Sailing Valley. This school accompanies skippers of varying categories in their offshore racing projects, from training through to mental preparation, on-the-water courses, etc.

Anaëlle will have to clock up 1,000 non-racing, solo nautical miles on a designated route to Ireland and a minimum of 1,500 racing miles aboard her Mini christened “Flash le 1042” to qualify for and take part in the 2023 Mini Transat. Given the solitary nature of this undertaking, these selection criteria ensure the sailors’ safety by placing a strong emphasis on experience.

“This two-year preparation in the Mediterranean and Atlantic will enable me to intensively train on my boat, pit myself against my future opponents and earn my place in the race’s “Production” class category,” explains Anaëlle.

The young Swiss offshore racer will be supported for the full two years of her project by the Mirabaud Group.

Born in Geneva in 2003, Anaëlle Pattusch began sailing at a very young age on the family sailing boat on Lake Geneva and on various sea cruises on rental sailboats. She learnt to navigate solo on an Optimist dinghy at the tender age of seven and took part in several Bol d’Or Mirabaud inland lake regattas on Surprise and Suspens sailboats. From age 12, she started to compete at the Versoix Sailing Club, first on a Laser and then on a 29er. She has completed numerous races and training courses including her recent extramural course with Alan Roura’s “La Fabrique Sailing Team”, sailing aboard Figaro 3 with Justine Mettraux, the Swiss Sailing League Women’s Cup on a J70 in Ascona in 2020 and in Davos in 2021, and the SYZ Translémanique en Solitaire at the end of August 2021, earning second place in the women’s category.

Alongside her sailing plans, Anaëlle Pattusch is currently preparing her bilingual federal high school diploma specialising in Biology/Chemistry. And once that is in the bag, she will move to Lorient at the end of June to fully devote herself to her Mini Transat project.

More than just a sport, sailing brings together talented individuals around shared goals. In perfect alignment with its own field of activity, Mirabaud is proud to associate its name and image with yachtsmen and women and their exceptional exploits.

Mirabaud has also sponsored Swiss sailor Dominique Wavre on IMOCA (during the Barcelona World race in 2010, the Transat Jacques Vabre in 2011 and the Vendée Globe in 2012) as well as Mike Horn and Dona Bertarelli’s team, Spindrift Racing.